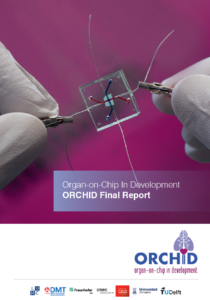 The ORCHID (Organ-on-Chip In Development) project has been finalized. During the final ORCHID meeting in Leiden on 23 September 2019, the European Organ-on-Chip roadmap and other deliverables and milestones of ORCHID were presented to a broad audience of end-users, regulators, clinicians, developers, policymakers and patient representatives.

The final report (click left to download) describes the achievements of ORCHID and refers to the relevant documents that have been delivered during the 2-year ORCHID project.